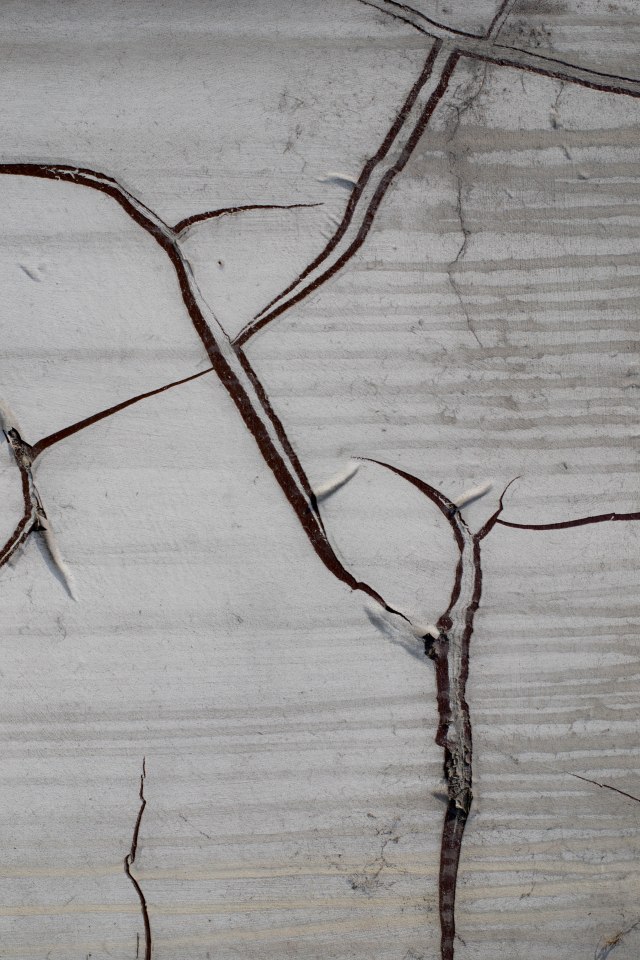 Davis missed the road. More accurately, he missed the discipline it had provided. He no longer expected it to re-appear. Davis wasn’t searching for the road. In fact, he believed that if he was to find the centre then it was necessary to leave the road behind, abandon it and this hadn’t proved difficult. No roads had survived on the plains.
But the evidence that they had once been prevalent was everywhere. Much of it was unused and un-useable and Davis realised that, in order to take what they need, he and the others had to keep coming back, to sift through it.
The roads were redundant and the idea of starting in one place and making for another, of heading toward a destination, was futile. Grudgingly Davis had to admit it was fitting the roads hadn’t survived out on the plains. That they were no longer a part of this landscape, that the landscape had changed. It was even flatter than before, and even more barren, apart from the debris of course. And yet Davis still missed the road. He considered creating one of his own by using the now useless or unnecessary things. He could build a kerb or a bank or even a wall, building on either side of him as he walked.

Davis feels he has failed, that by turning back he is giving in. He tries hard to convince himself it is just a setback but he has been searching for days and hasn’t yet managed to re-find the road.
Davis is lost, or at least this is how it seems, how he feels, but of course he isn’t. The road has led him to here and it is a place of plenty. Admittedly most of what is scattered and strewn on the ground is now useless – phones and tablets and other devices with screens. Many are broken, have been kicked about and stamped on but most are still intact, still in their original packaging.
Kneeling down, Davis grabs a phone. It is the one he had wanted before but hadn’t been able to afford. He claws at the box, pulling away the clear plastic and holds the phone in his hand. It is the latest model, he realises, the last model. There won’t be another, a sleeker and faster and more desirable version. Davis pushes the green button and waits but nothing happens.

The road has disappeared entirely and Davis is unmoored and has been cast adrift. He lingers for longer now amidst the debris, sifting and kicking his way through it. He realises of course that if he is to continue he will have to be prepared and to carry provisions.
Davis searches for something with which he will be able to do this. A rucksack would be ideal or a suitcase, preferably one with wheels. But he is unable to find either of these, or even one of those sturdy carrier bags the supermarkets used to sell. ‘A Bag For Life’; that had been the motto. Davis remembers how he had always forgotten them and whenever he visited a store he would purchase another until eventually there were so many kicking around the house that he had been forced to gather them up and throw them in the dustbin. Now, when he really needed one, when he really, really needed one there were no bags for life, not out here.
Davis considers constructing something himself, anything flat with ropes attached would suffice. A makeshift sledge he could drag along behind him. But, although he isn’t sure why, it doesn’t feel right to use something he has fashioned and cobbled together. No it has to be something from before, something still intact, still useful.
Turning back Davis thinks about all the shopping carts he has passed. There were so many of them abandoned alongside the road. But Davis had stopped noticing, he had stopped seeing them.

The road was fading and Davis was convinced this was because he was getting closer to the Centre. For so long he had been walking on a road that was unchanged, as good as it had been before, but now it was deteriorating. When he looked ahead it was no longer a ribbon cutting its way through the desolate landscape. It was hardly distinguishable from the hardened earth on either side and difficult to follow.
The possibility that he would have to abandon the road was a daunting prospect. But Davis was determined not to turn himself around, to double back.
And so he forced himself onwards and thus far he had always managed to re-find the road but now it was fading and following it had become a task.

As he walks Davis thinks almost constantly about stopping. This idea, more, this conviction plays in his head as if on a spool. An extract from a news bulletin but one he has missed, that he hasn’t heard, one, perhaps, he has had to invent.
It isn’t so much that Davis wants to stop, more that he feels it is necessary. That, if there were anyone still around to give out advice, someone from the Government perhaps, or the Army or the Police, the message would be to make the best of things and begin again.
But Davis doesn’t stop, and he doesn’t have to stray far from the road. There is so much now that is useless but Davis sifts through it in order to take what he needs. Food and drink, of course, or a change of clothes or a new pair of shoes. Occasionally he and one of the others will cross paths and they might nod at each other, even smile. But despite the message lodged in his head Davis keeps on walking.