I have abandoned the route and my meandering has now moved onto a new level. I am exploring a vast area that was once a thriving centre of industry but is now deserted.
I walk between the buildings and the sky above is reduced to narrow strips of grey. I am unsettled by this place and find it difficult to navigate. Whenever I reach a door, one that isn’t locked or boarded, I step inside. Or if there is a hole, and there are a lot of them, where the bricks have crumbled and fallen away, places where I can climb in or crawl through and this I now do, down on my hands and knees, pulling and kicking at the earth until I am standing on the factory floor.
At the outer edges people are holding on and still finding ways to be useful but here almost everything of value has been taken and these buildings, the factories and the warehouses, have been stripped bare and are merely husks.
I look down at the tiles beneath my feet; they are grimy but in the dusty half-light they glint and they gleam

This street is steep, steeper than the others. I am climbing it and making my way toward somewhere or something. Suddenly it stops and I am at the top.
Wasteland stretches in front of me. It is rubble strewn and, looking down, I see that the earth at my feet is parched and cracked. I move away from the edge and the last of the houses look as though they have been sliced through with a giant cleaver.
Stepping out into the open I wonder what it was that once stood here. More of the same? Yet another street, terraced houses on either side and cars jammed tightly alongside the pavements?
But I now see that the foundations here are for something bigger and I am walking across a vast factory floor. The concrete is still stained with oil and, crouching, I inspect one of these dark pools. I touch it, my hand coming away, the fingers smeared with grit and grease.
Pushing myself up I am standing in the middle, but from up here I can see the other factories in the distance, those that are still standing in varying states of dis-repair with tracts of land, the spaces in-between the places like this. 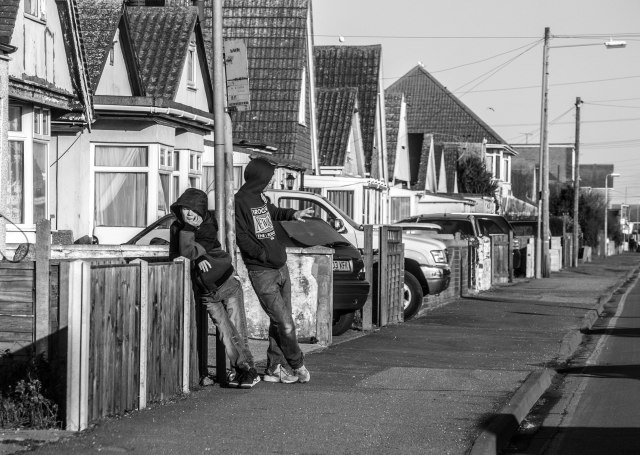 Owen wanted to remember the time before he and Daniel had begun to talk about getting out. The period without that central theme disrupting their lives, but it was difficult not to dwell there, especially now. They had been young and of course it was inevitable that they had become obsessed with the world beyond the valleys and the desire to escape this town that, after the mine had closed, was left to fend for itself and yet had somehow managed to cling on.
How old had they been when it started? Owen tried to delve way back and dredge up memories from an earlier time, before the dreams and all the big talk about what they would do, and where they would go. Thirteen, twelve, or possibly even younger, ten maybe, but he couldn’t be sure, not now.
They had started off small or at least relatively so. A motorbike, a fast car, a pretty girl. But nothing they could invent was too elaborate and no prediction they could make for the future seemed impossible. And before long, in their imaginary world, they were jetting across the globe, staying in state of the art apartments in big city after big city. They each had a country mansion with a helipad and a swimming pool and a gym in the basement.
The girls in their school weren’t interested in them and so they populated this other world with the beautiful women they saw on television – pop singers, film stars and models.
Inevitably, the constraints of growing up in a small town (particularly one like this without any purpose) were unavoidable. Gradually reality began to seep in and it invaded their thoughts. By the time they were seventeen, they still talked the talk but their hearts weren’t really in it. They continued to frequent the old haunts but they no longer climbed up into the hills above the town anymore.
It was up there they had played before and most probably where they had first sat and hatched their grand schemes and dreams. But it was down here on the streets that, like a fish thrashing on the riverbank, they had been left to flounder.

Although he didn’t suspect that anything was afoot, Owen was more than a little taken aback when Daniel said,
‘Come on, let’s climb the hill.’
‘No way,’ Owen drawled.
They were sitting on the steps in front of the town hall. Pushing himself up, Daniel moved out into the square and stood beside the old water trough.
‘Come on,’ he repeated, ‘let’s go up.’
‘Why?’ Owen asked.
‘I need to talk to you.’
‘Talk then.’
‘There’s something I need to tell you.’
‘Then tell it.’
Turning, Daniel started toward the road.
‘Come on,’ he shouted, ‘I feel like walking.’
‘We can walk down here,’ Owen mumbled to himself but, standing, he followed.
The path began at the end of the street, just beyond the last row of cottages. The town’s children had always tramped along it, ensuring that it survived down the generations. Owen felt that he and Daniel had already done more than their fair share of tramping.
‘Wait up,’ he yelled. But Daniel, storming ahead, didn’t hear or he had chosen to ignore him. Owen kicked at the path and walked a little slower, if that were possible.
‘Okay,’ he grumbled, ‘wait up there, you’re not going anywhere.’
As Owen reached the top it suddenly struck him that the rolling countryside that greeted them had barely registered in the past, that they had always turned toward the town and looked down at the familiar. Daniel was still out of breath, standing in a half crouch, hands on his knees, gasping for air.
‘You’re out of shape,’ Owen laughed, ‘you need to get some exercise.’
‘I intend to.’
‘Yeah, right.’
‘No, seriously. I have to.’
‘Why?’
‘I’m joining up,’ Daniel straightened up but as he spoke he looked down at his feet. ‘The Army. I’m signing up.’
‘You’re joking.’
‘No, I’m not.’
Owen stepped back and studied him, incredulous. Daniel stared blankly.
‘I have to do something,’ he said at last, ‘and it feels right for me.’
‘Don’t tell me you are really going to do this, Dan. Don’t be an idiot.’
‘I’ve already done it. I’ve enlisted – is that the right word? I don’t know. Anyhow, I’m in, signed up. I leave for basic training in a couple of months and so, like you say, I need to get fit. You could help me with that.’
‘I won’t help you,’ Owen turned to leave, ‘I’m going back down.’

Although after this things between them were stilted they continued to be close. How could they not be after so long? Their fantasising had been brought to an abrupt halt and they had forgotten how to communicate but Owen did ask just one more time.
‘Why?’
‘Because I’m not like you.’ Dan said.
‘What do you mean?’
‘I’m not smart.’
‘Yes you are.’
‘No, I’m not. This is right for me.’
Owen remembered he had said this before, up on the hill and he rolled his eyes.
‘No, Owen, I’m serious. This is an opportunity for me and I’m determined.’
‘Okay,’ Owen sighed, ‘then I hope it works out for you.’
‘Thanks,’ Daniel reached out and clapped him on the back, ‘that means a lot,’ he said.

He adopted a strict exercise regime and, as Owen watched him from afar running up and down that hill he thought to himself, why are you bothering? It really won’t matter. After the training, if you still want in, then they’ll take you.
And he still believed this, that it wouldn’t have made any difference if Dan had been a little less fit and not quite so determined. They still would have sent him out there. He wouldn’t have been denied his moment in the Sun and the Daily Mail. They had published his photograph in the national press along with all the others who had been killed up until that point.
He had come home, after boot camp, and he was different, had grown up and seemed so much more self-assured as if he were prepared for whatever the Army might throw at him. Everyone commented on this, his family and friends, most of the town in fact. They were impressed and proud. He even found time for a special chat with Owen who knew his mother was behind this little pep-talk and that though the advice he gave sounded good Owen couldn’t help but think that Daniel sounded pompous, a bit of a prat.
He hadn’t listened, hadn’t gone back to school and finished his A-levels but after Daniel died nobody bothered him or tried to push him. He had been left alone.
It had been almost a year now and he wondered how much longer it would be before they began again, to nudge and coax and shove him out into the world.